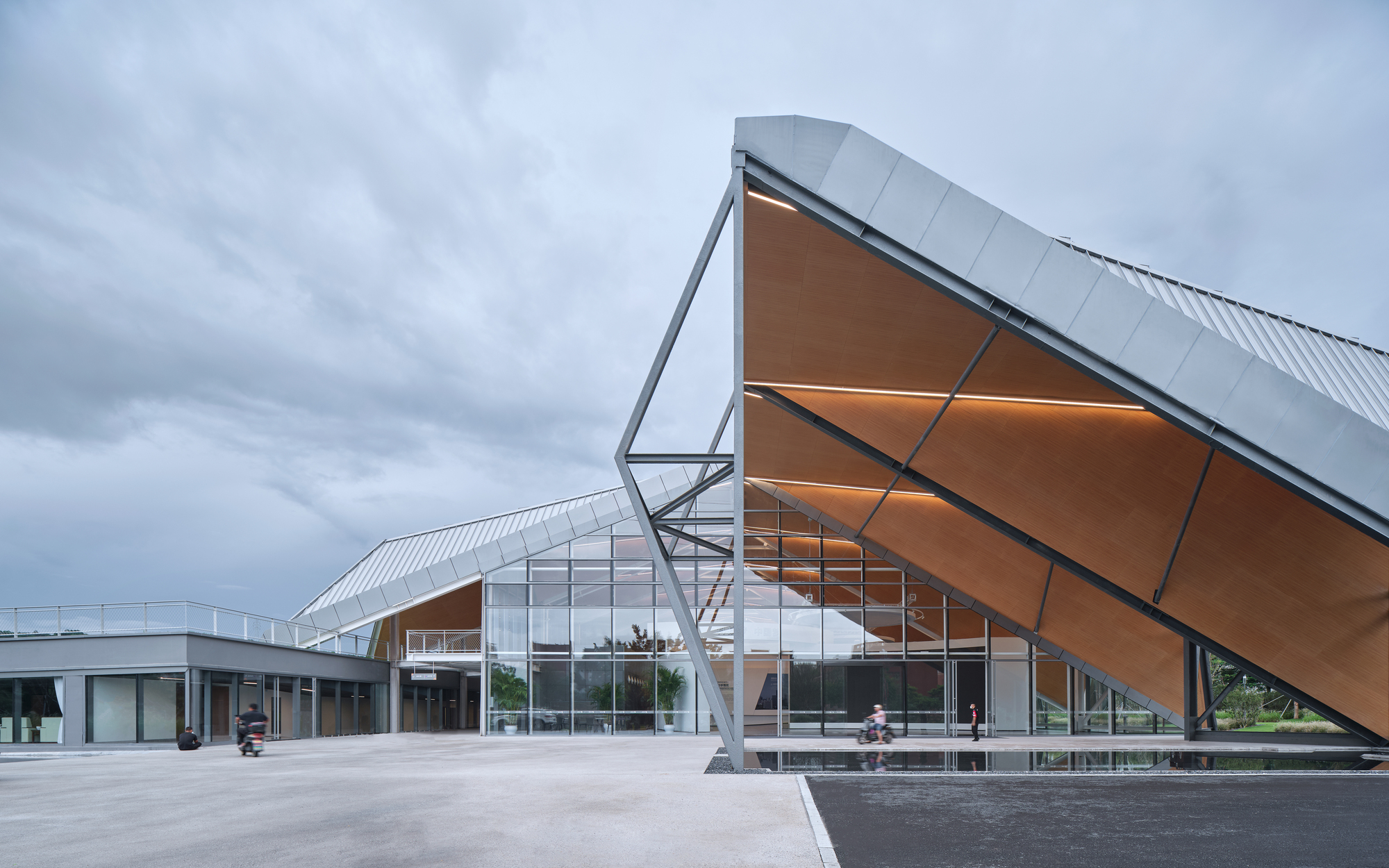 Text description of the architects. The Maozhou River is the largest water system in Shenzhen and flows through the Baoan and Guangming districts. Mainly industrial areas are located along the waterway, of which Guangming District is best known as a novel city for high-tech industries. The Left Bank Science and Technology Park is located on the Guangming section of the Maozhou River, making it one of the main public hubs of the 12.8 km Greenlane Project on the Maozhou River. The terrain is divided vertically by two city highways. The triangular property is scattered with an interim storage facility. Together with the hardened soil surface, the presence of water is barely noticeable from the construction site. What should have been a great waterfront has become a void separating the city and the water.

In 2020, this once forgotten place will be given a chance to revive as an exhibition center and an urban theme park for science and technology will be planned, as well as the opportunity to reintroduce and embed nature. The footprint of the exhibition grounds is relatively small compared to the 88,000 m² triangular area, which means that it is mainly open spaces. Placing the building in a corner of the property or stacking it vertically are not suitable bulk strategies with such a low density. Although the area is no more than several thousand m², we have expanded our scope to the 88,000 m² site. Taking into account the specifics of the site geometry, we placed the main entrance and main exhibition rooms along the long edge of the site and proposed a footbridge that would connect Loucun Wetland Park across the river.

The circulation on the site is treated as a brushstroke and materialized as elevated passages that form two systems with orange-colored scientific exhibition scenes and blue-marked ecological exhibition scenes. The two systems meander through the park, cross and overlap and at the same time provide shade for the ground floor. The raised structures of varying density form the backbone of the project and create an open public space that connects different parts of the park, the river confluence and the waterfront. Buildings, elevated structures and urban infrastructure are organized as fixed elements of the project. They function independently while participating in the systems of orange and blue. Together with the open spaces in the park, they form a balanced figure-ground ratio.

North of the main exhibition hall, the lawn is gradually raised to the second level, where visitors can walk to the upper floor of the architecture, take the elevated corridor system and get to the roof of the secondary exhibition rooms, where a spectacular view of the river is offered. Under the lawn is a multifunctional assembly hall, the concrete structure of which supports the folded steel roof of the main exhibition hall. The oversized elevation gently dissolves into the landscape.

Secondary galleries are unfolded along the river. Their roof is organized in the raised corridor systems so that the view of the river is preserved for the public. Through the gaps between the roofs, a continuous area leads to the embarkation and the V-shaped footbridge. By implementing the same modular system for walk-through systems and showrooms, other smaller showrooms can be dynamically added to the system.

Outdoor exhibits, including those on eco-engineering and technology, are scattered along the orange and blue public transportation systems. Together with wetlands, shallow pools, fountains, and event spaces, they make up a series of exciting locations avoiding a grand and uniform landscape. The event-based strategy brings energy to the park. By converting the hard surfaces into permeable soft soils, the project offers ecological filtering of rainwater and high-quality public space.

Due to the tight planning and construction schedule, we implemented modular systems for the construction of the project. The main exhibition hall is realized by spatial steel frames with a maximum span of approx. 38 meters. Secondary exhibition halls are partly steel structures with a span of 20 meters, which are integrated with the sloping roof into a rigid framework system. The prefabrication of steel structures was used in the construction as far as possible. Thanks to close cooperation with other consultants, the project could be planned and built within 6 months.

In Colorado, electric cars are mostly for rich people. Could federal and state politics change that?