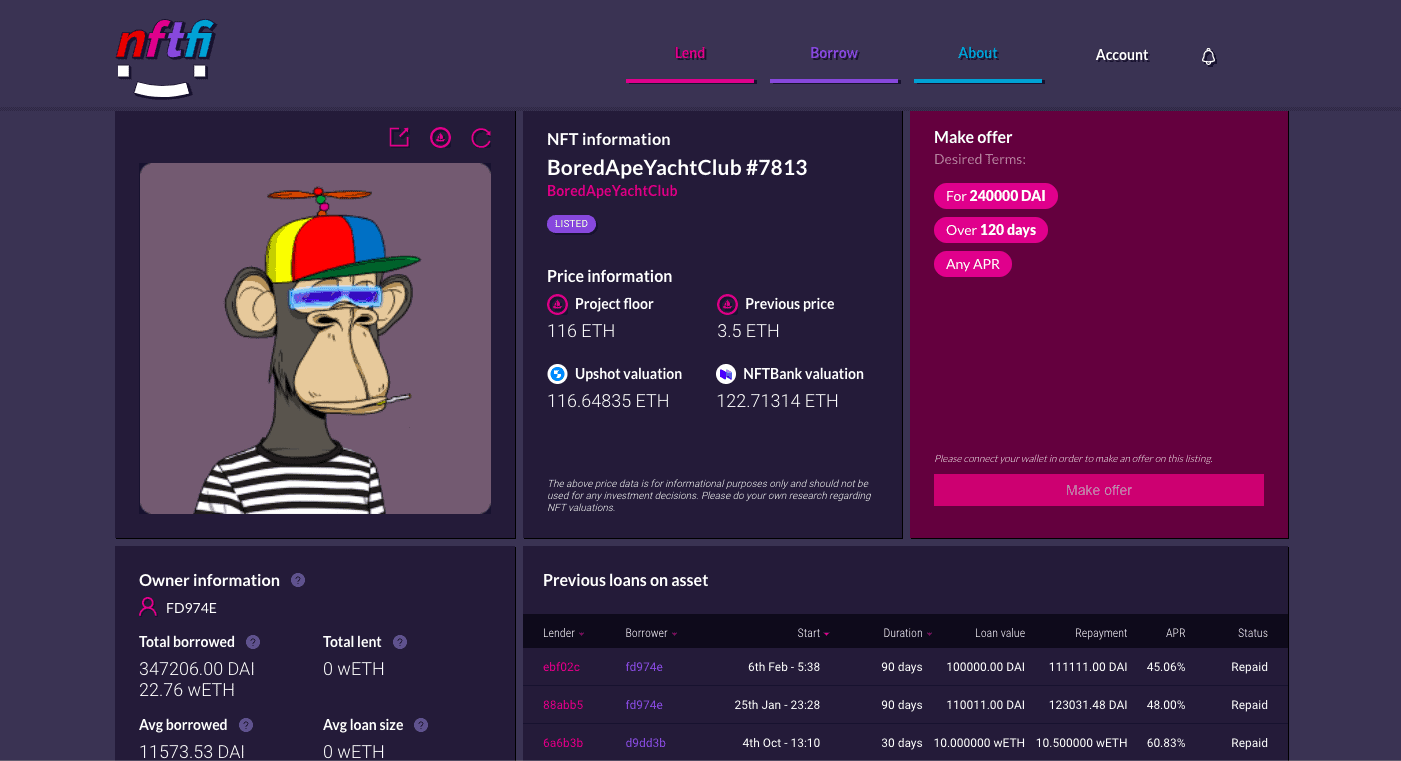 NFT-backed lending is gaining traction, but what are the risks?

For evidence of the growing popularity of asset-backed loans using non-fungible tokens (NFTs) as collateral, visit the NFTfi lending marketplace.

The peer-to-peer site said it processed about $88 million in NFT-backed loans in the first three months of this year, or more than double the $40.7 million in all of 2021 Arcade, another NFT lending platform, said it has helped disburse $24 million in loans since its inception in January this year.

“We’ve seen a spike in activity over the past year as more NFT holders discover how to unlock additional liquidity from their digital assets without selling them,” said Stephen Young, Founder and CEO of NFTfi forcast.

Arcade estimates that the total NFT-backed credit market is currently worth up to $400 million, while NFTfi has a more conservative estimate of around $200 million.

All well and good for this burgeoning industry, but NFTs are highly volatile assets that reflect the volatility of their underlying cryptocurrencies like Ethereum or Solana. So what are the pitfalls for borrowers and lenders?

In one example last year, a borrower used an Elevated Deconstructions NFT, then valued at around $39,600, as collateral for a $12,000 loan. Within the 30-day loan period, the NFT’s value rose to around $300,000 after Snoop Dogg and other prominent NFT owners praised the work.

But that didn’t help the unnamed borrower, who ended up losing the NFT after defaulting on the loan, leaving the lender with a valuable asset and a juicy profit.

The risk of default is why several lenders have what is known as lend-to-own policies, which means that the lender owns a likely lucrative NFT if the borrower fails to repay the loan. This offers some enticing scenarios.

The largest NFT-backed loan was issued in April when an anonymous NFT collector pledged his collection of 104 CryptoPunks NFTs as collateral for an $8.32 million loan. The same collection was valued at $20-$30 million by auction house Sotheby’s in February.

In March, another NFT collector borrowed $8.08 million by collateralizing a bundle of 101 CryptoPunks NFTs. This week, crypto lender Nexo announced that it has arranged a $3.3 million loan backed by two CryptoPunks Zombies NFTs through the arcade platform.

Although these examples are outliers and the average loan amounts are lower — $18,114 for NFTfi and $300,000 for Arcade — they help illustrate the growth spurt in NFT-backed lending.

While companies that offer credit may have an opportunity to acquire valuable NFTs at a distressed price, they also face downside risk.

As an example of extreme volatility, the NFT of Jack Dorsey’s first tweet sold for $2.9 million in March 2021, but in an April auction the top bid for the same NFT was less than $280.

A sharp drop in an NFT price can also cause borrowers to default. But according to NFTfi’s Young, “Defaults are not that big of an issue for NFTfi because all of our loans are overcollateralized and many lenders actually use NFTfi to purchase NFTs for a discount on defaults,” Arcade said in an email response Ask that there have been no loan defaults so far.

Most platforms allow borrowers to secure loans equal to 20-30% of their collateral. At another NFT-backed lending site, Drops DAO, lending is capped at 30% of collateral value. Arcade has loan-to-value ratios between 20% and 60%.

Still, risk increases when lenders are unable to properly value an NFT, as values ​​can be affected by intangible factors such as scarcity and sudden changes in popularity.

NFTfi’s Young says the lenders on the site can range from people looking to generate additional income to professionals using artificial intelligence to evaluate NFTs.

“We advise lenders to be careful to choose a loan-to-value ratio they are comfortable with, not make large loan offers on assets they cannot adequately value, and only offer longer-term loans (30-90 days) to NFTs They believe it will retain its value throughout the loan period,” he said.

However, Arcade said it provides ratings and estimates for NFTs to help lenders and borrowers reach an agreement. It has an “in-house data engineering and science team working to automate assessments,” said Gabe Frank, CEO and co-founder of Arcade forcast in an email.

As for the basics of how peer-to-peer lending works on NFTfi, once a loan offer is accepted, a contract is created and the NFT is sent to an NFTfi escrow account while the loan is transferred to the borrower, who receives an NFTfi -Promissory Note NFT. All of this takes place simultaneously in a single transaction, eliminating the risk that one of the parties does not receive the promised assets.

With an APR of up to 302% for seven days and loan terms of up to 90 days, it’s the borrowers who take a much higher risk in such deals.

In addition, just like in traditional finance, a credit default is recorded and impacts creditworthiness. Because borrower default rates on NFTfi are displayed to lenders, a high default rate can make it difficult for borrowers to secure loans. This is also to ensure that borrowers do not intentionally default if the value of their secured NFT falls.

According to Arcade’s Frank, there are projects working on on-chain credit scoring and identity, but it has yet to be widely adopted.

Also, early foreclosure of NFT loans on NFTfi can get expensive. This is to ensure borrowers don’t prepay to take better offers from other lenders, Young said.

“We limit the repayment amount to 50% over the loan amount to avoid predatory offers,” he said. “On a seven-day loan, that’s still a very expensive APR.”

Loans worth ₹35,000 crore at risk as RBI disallows letters of comfort

Are Federal Student Loans Even “Loans”? From leniency to forgiveness to taxpayer…