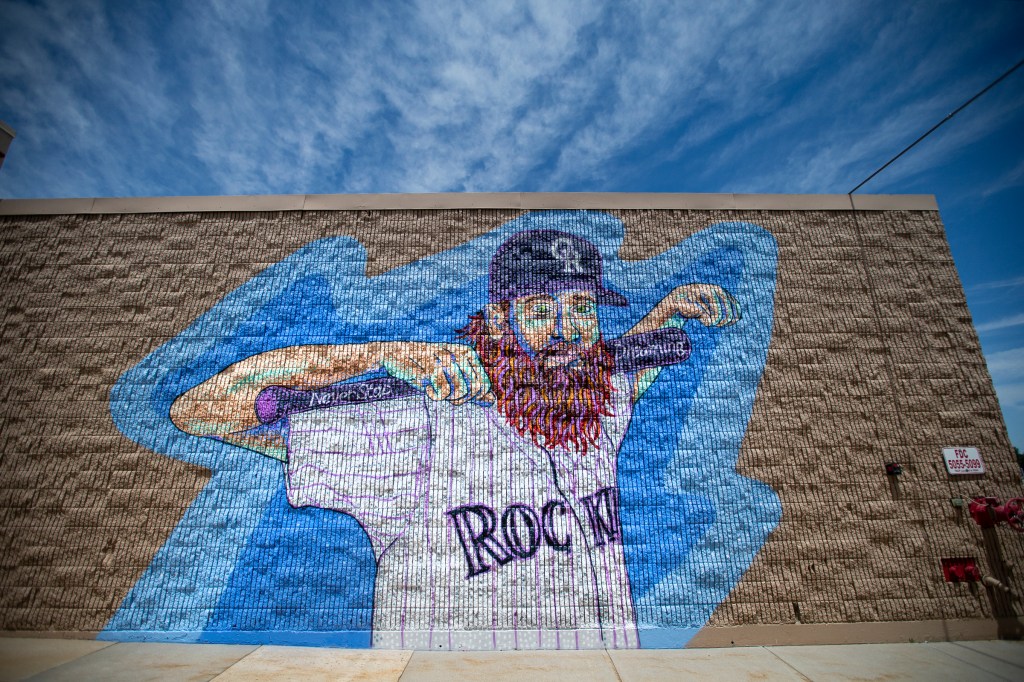 New mural by Charlie Blackmon in Broomfield aims to inspire


Colorado Rockies outfielder Charlie Blackmon is now permanently hidden in Broomfield Plaza. And although it is two-dimensional, its message is clear: never stop dreaming.

The owners of the square hired Denver-based mural painter Austin Zucchini-Fowler to bring the empty, 5.5-meter high and 14-meter wide wall to life. The artist spent nearly 20 hours and at least 20 cans of spray paint on the project in four working sessions and finished it on Wednesday.

“I was contacted about a month ago and we went through the design process and developed the design together, and it’s gone from there,” Zucchini-Fowler said. “We thought about different personalities who made an impression in Colorado and we decided on Charlie Blackmon.”

The mural is located between Sherwin-Williams and Kidcreate on the Plaza, 5015 W 120th Ave.

The Broomfield Plaza Mall is owned by NewMark Merrill Mountain States. Danaria McCoy, vice president of operations and marketing for the company, said the mural is part of NewMark Merrill’s Community Art Initiative to bring engaging art to malls across the country. She said she found Zucchini Fowler through some of his other murals.

“Not only is he a phenomenal player, the audience also sings ‘Your Love’ when he hits the bat. It brings people together, ”said McCoy of Blackmon. “Austin came up with the design and presented it to us, and we loved it right away. He developed the quote and the pose. We thought it was a really cool portrayal not only of Charlie Blackmon and the Rockies, but also of the spirit of dreaming, be it in COVID or in everyday life. “

Zucchini-Fowler said he first sketched the design in the Procreate iPad app, which also enabled him to plan where the mural itself would be placed on the wall. Then he used a projector to blow up the sketch on the wall.

The wall he painted on has a unique texture. It’s wavy, rough, and bumpy, and almost resembles small, narrow tiles.

“It kind of influenced how the piece was made and the direction and way I created it,” the muralist said of the surface of the wall. “I’m proud of the way it looks and how it turned out. It’s always a good feeling when I can sit back and look and, while I’m working, get passers-by to be very friendly and to realize that it’s Charlie and super grateful that there is paint on the wall.

Zucchini-Fowler said when he finished the piece on Wednesday a girl he guessed was 6 or 7 years old came by. The girl told him that when she grows up she would like to be an artist, and Zucchini-Fowler spoke to her about public art.

“And in the end, she wanted to be a public artist,” he said, adding, “My favorite thing about public art is that it’s free. Anyone can stop by and drop by. It doesn’t cost anything, it’s like an open art museum, and the city is the landscape. … It inspires people to be artists and inspires people with messages. “

The mural, completed just in time for the Major League Baseball All-Star Game at Coors Field, was unplanned but accidental, McCoy said.

After picking an artist and randomly landing on a baseball-themed mural and then getting it approved with the city and county of Broomfield, “it turned out to be ready before the All-Star game,” McCoy said .

McCoy said the company plans to add seating and other enhancements near the mural to make it a place for buyers to meet or parents to wait for kids at the plaza’s Colorado Swim School and Kidcreate Studio .

“Personally, I hope it brings joy and inspiration, no matter what someone’s dream is that they never stop reaching out to them,” McCoy said of the mural. “If COVID has taught us something, it is best to come together and not give up and remain resilient as we try to achieve our goals.”

Zucchini-Fowler said he was coming back Tuesday to put a UV coat on the mural to protect it from the sun, which is the final step.

You can find Zucchini Fowler’s work at austinzart.com

The CFO’s role in promoting diversity, equity and inclusion